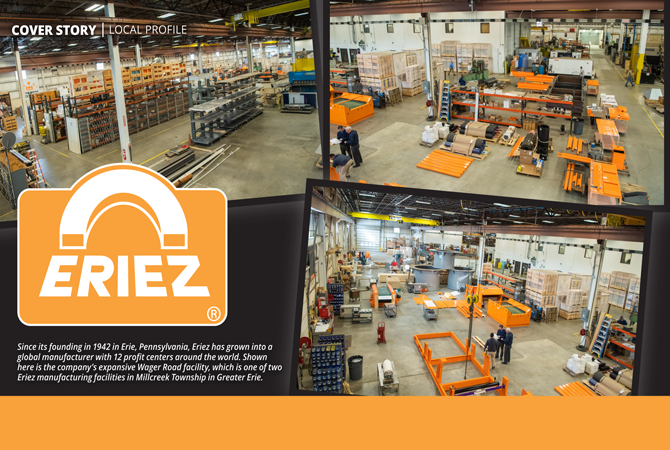 A world authority in separation technology, Eriez® is a manufacturer focused on the future while holding onto the values of its past.

Embarking on its 77th year in 2019, the closely held company has a presence in 12 profit centers on six continents, with a worldwide workforce of approximately 860, generating an estimated $200 million each year.

At the heart of its operations — and history — is Erie, Pennsylvania, which is home to its world headquarters and Eriez USA manufacturing division, with 350 employees at two 120,000-square-foot facilities, located at Asbury Road and Wager Road in Millcreek Township.

President and CEO Tim Shuttleworth describes Eriez, which was founded by O.F. Merwin in 1942, as a company that is committed to the community in which it operates and where it creates hundreds of jobs. “I tell people we’re in Erie, Pennsylvania for sentimental reasons not really for economic reasons,” he says. “We’re here because this is where we were founded, and this is where we’ve grown.”

Leading the Way
At Eriez, what started as a way to make a permanent magnetic separator that would be used to remove stray pieces of metal or “tramp iron” from grain has evolved into a manufacturer of nearly 100 diverse products. From massive electromagnets and rugged metal detectors, to heavy duty vibratory conveyors and feeder systems, there is no mistaking Eriez’ trademark “orange,” its signature products or their impact on industries around the globe.

Eriez’ national and international customers — which encompass everything from food manufacturers to those in the chemical, mining, metalworking, aggregates, textiles, plastics, packaging, rubber and recycling industries — look to Eriez as a leader in separation, inspection and material handling equipment. In their view, Eriez is a reliable, quality-driven manufacturer that is committed to staying ahead of the curve.

In fact, Eriez’ commitment to innovation is one of the hallmarks of the company’s ongoing success, thanks to its rich history and ongoing investment in research and development.

Eriez Flotation Division, for example, is not only a leading supplier of proprietary process equipment and new technology for the mining and minerals industry, but its innovative people and products, such as its HydroFloat® separators, are helping to “rewrite the book” on industry standards.

“For example, it takes 15 to 30 years for something to become standard in the minerals industry,” says Shuttleworth, “and the reason is that all of their investments are mammoth. They are very risk adverse people, but we have new standards on the horizon and are getting traction.”

Previous PostAssociation to Host Legislative Luncheon with State Senators Laughlin and Brooks on May 9 Next PostMinimum Wage or Minimum Business?