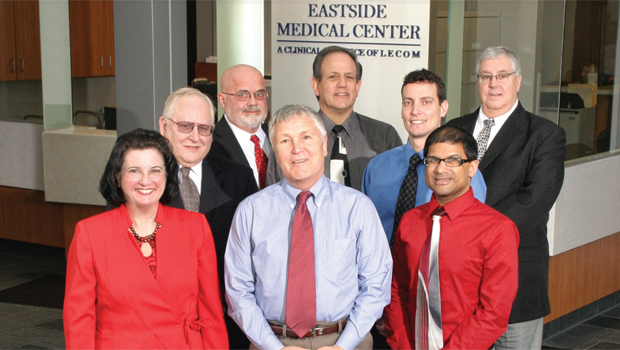 Eastside Medical Center opened its doors on Parade Street nearly 30 years ago today. The building, still in its original location, is nestled along the southwest corner of 26th and Parade Streets — and amongst some of Erie’s historically sweet staples, which include Pulakos 926 Chocolates and Mighty Fine Donuts.

The practice is also part of Medical Associates of Erie (MAE), the clinical practices of the Lake Erie College of Osteopathic Medicine (LECOM). One of 15 practices that MAE embodies, the group is part of a network of 36 physicians and specialists, one optician, a full retail optical boutique and 15 physician office locations throughout Erie County. It is an affiliate of the Millcreek Health System, which boasts Millcreek Community Hospital, LECOM, the 50-bed longterm care and skilled nursing Millcreek Geriatric Education and Care Center (Millcreek Manor); the LECOM Institute for Successful Aging, which includes an interdisciplinary team that provides clinical services to the 50 and older population of northwest Pennsylvania; and the LECOM Medical Fitness and Wellness Center. Millcreek Community Hospital originally founded LECOM, which is now the largest medical school in the country.

Prior to joining the network, Eastside Medical Center was originally started and independently operated by emergency medicine physician Dennis Agostini, D.O. in 1980. After completing his residency, Agostini knew he wanted to practice medicine in an underserved area of the city. “At the time,” he says, “there were limited health-care options available on the east side of town, and I felt it was a great location to start a practice.”

At the beginning, there were only a handful of physicians that rented space from Agostini. After a couple of years, Eastside would officially become incorporated and during that time, Frank Tursi, D.O., a family medicine physician would join the practice. Tursi had graduated from the Pennsylvania College of Osteopathic Medicine (PCOM) and completed his residency at Millcreek Community Hospital.

“Although, I started with Eastside in 1982, since it opened its doors, it has always been known as a family practice,” Dr. Tursi states. “Soon after I started, in 1983, David Fox, D.O., another family medicine physician, would join the group — and he is still there today.”

Read the entire feature story in the March 2013 Business Magazine.