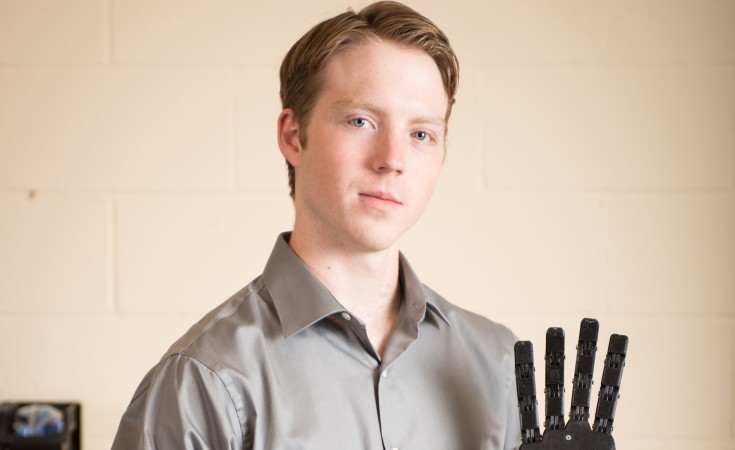 When you think of America’s greatest inventors, the names Benjamin Franklin, Alexander Graham Bell and Thomas Edison come to mind. Their discoveries and inventions have made a profound impact on society and technology as we know it.

As Edison so famously said, “I found out what the world needs. Then I go ahead and try to invent it.”

Fast forward to today, and 20-year-old Easton LaChappelle is doing just that. As founder of Unlimited Tomorrow with partner Tony Robbins, the inspirational inventor has caught the attention of the world with his revolutionary technology — advancing 3D printing robotic arms for the use of prosthetics. His story is not only about innovation and technology, but also what is possible when you put your mind to it — especially at such a young age.

“What’s amazing is that a young person that is 18 can actually start a company and launch their idea and really take things to the next level,” says LaChappelle, during an interview with the Manufacturer & Business Association’s Business Magazine in advance of his keynote address at the Manufacturing Day celebration on October 5 in Erie. “I travel all over the world now, and I love talking to kids because there’s more opportunities at your fingertips that you can go out and find your passion and really run with things. There’s very little bounds with that, and there’s so many resources to do what you actually want to do.”

The Colorado native has been taking apart things since he was a child, tinkering with anything he could put his hands on. “I was one of those kids that took apart everything I got when I was little. Every toy or every appliance that stopped working, I would just rip apart,” says LaChappelle. “Once it got into a real, actual advanced project, it’s not just taking things apart, it’s actually putting things back together and making them work. That was an interesting part.”

Growing up in Mancos, a small town of about 1,000 people, LaChappelle didn’t have a ton of resources for research and development, so he turned to the Internet and taught himself programming, electronics and 3D modeling.

“I was always looking for ways to learn more than just what’s offered,” he explains. “That’s really when I turned to the Internet and found there’s so much information and resources.”

At 14, he says, he created his first robotic hand out of LEGOs, fishing wire and electrical tubing. With gradual improvement, the hand turned into an arm and advanced to a 3D-printed brain-powered invention that he could operate with his mind.

However, it wasn’t until an encounter with a 7-year-old girl at a science fair whose prosthetic arm cost $80,000 that LaChappelle was inspired to turn his prototype into a practical and affordable device.

“I noticed a small girl come up and kind of caught my attention because she was really focused on some of these smaller details,” he says. “Then, I noticed her parents were standing behind her. I started talking to them and realized she had a prosthetic limb. It was a very basic prosthetic where it was essentially kind of a human-like cloth. It was just like a small hand that could open and close. There was no individual finger movement, and it was pretty much one motion. It also had one sensor to be able to control and work the muscles.”

As he talked with the girl’s parents, LaChappelle describes his “aha” moment. He knew he could make a more functional and affordable option for her and others.

Read more in the October 2016 edition of the Business Magazine.