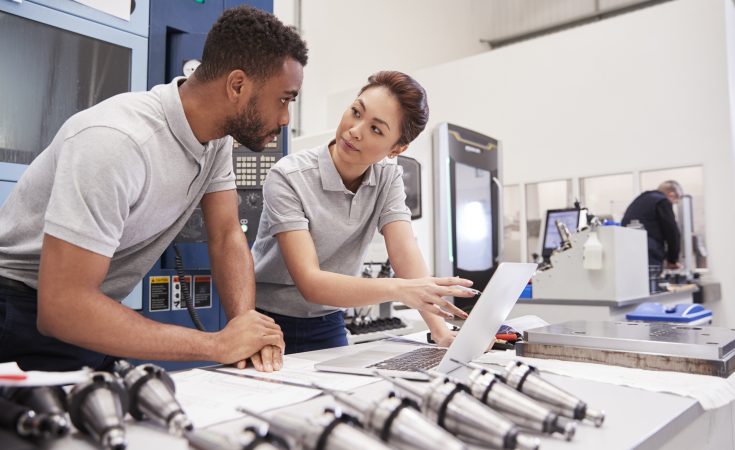 Although there’s been a massive effort to recruit more young people into the skilled trades and STEM careers (science, technology, engineering and math) in recent years, the demand for skilled workers in manufacturing isn’t going away anytime soon. In fact, the demand for these workers is stronger than ever.

According to research by the consulting firm Deloitte, as many as 2.4 million manufacturing jobs may go unfilled by 2028, putting $454 billion in production at risk. A lack of skills and “impending retirements” of current workers “suggest the industry could experience employment bottlenecks,” the consulting company said in a report done with the Manufacturing Institute, the social impact arm of the National Association of Manufacturers (NAM).

The recent report was based on a survey of 400 U.S. manufacturers and supplemented with executive interviews, analysis of data and economic forecasts.

Manufacturing “must contend with one of the tightest labor markets in recent history,” Deloitte said. The 2.4 million figure assumes manufacturing employment will average 1.5-percent growth a year. In 2018, there were 508,000 open jobs in U.S. manufacturing.

In an industry that contributes so much to the economic vitality of our state and nation, the shortage of skilled workers indeed matters.

Manufacturing represents an essential component of gross domestic product. In 2018, it was $2.33 trillion. That drove 11.6 percent of U.S. economic output, according to the Bureau of Economic Analysis. Manufactured goods comprise half of U.S. exports.

Manufacturing adds a lot of value to the power of the U.S. economy. Every dollar spent in manufacturing adds $1.89 in business growth in other supporting sectors, according to NAM, such as retail, transportation and business services.

The United States has 12.75 million manufacturing jobs, according to the Bureau of Labor Statistics. That employs 8.5 percent of the workforce. These jobs pay 12 percent more than all others.

In this edition of the Business Magazine, our 10th annual Made in PA issue, we’ll highlight the impact of manufacturing, especially here in the Keystone State, and the many employers who are proud
to have operations here — as well as around the globe.

We’ll talk with Eriez President and CEO Tim Shuttleworth about how the company, “a world authority in separation technology,” became a global manufacturer by staying focused on the future while holding onto the values of its past. We’ll also talk with Andy Renkey of Harmony Castings about the innovative processes at the company and why its proud to manufacture in PA.

Plus, don’t miss our Showcase of Manufacturers, which features many of our member companies that contribute to the success of manufacturing in the Commonwealth.

The Manufacturer & Business Association is always proud to support business and industry through its many programs and services. Visit www.mbausa.org to learn more!