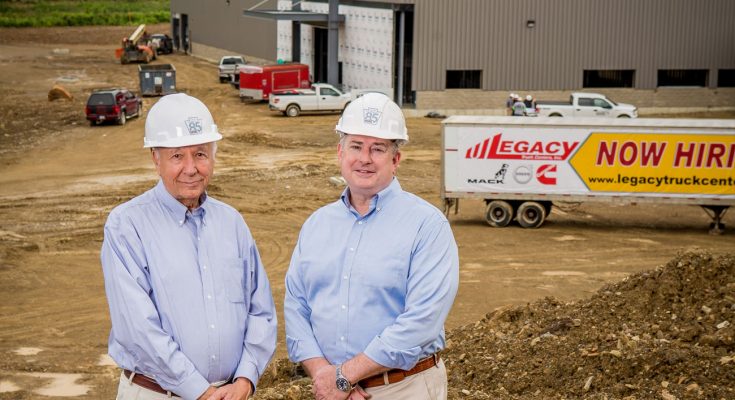 Overlooking the busy traffic along Interstate 80 in Brookville, Pennsylvania, construction crews have been hard at work erecting a new, state-of-the-art Legacy Truck Centers dealership for a grand opening this fall.

John Niebauer Jr., founder of Legacy, which sells new and pre-owned heavy duty trucks, says the project consolidates two dealerships, making it the largest of its nine locations in Pennsylvania. The project represents a $7 million investment for the company, which needed the skills and experience of a trusted builder to get the job done right.

“It’s quality first with Kessel,” explains Niebauer, who owns Earth Movers Unlimited, Inc. and has worked with Kessel Construction CEO Dick Kessel for over 35 years. “Dick Kessel has been a man of integrity ever since I’ve known him. You know when you say the name Kessel that you will get a quality product.”

Niebauer’s son John III, who took over Legacy’s ownership two years ago with his brother Matt, has been equally impressed with Kessel’s work.

“Their pricing was competitive, and they have a very experienced staff,” he says. “Kessel Construction has done a good job on the quoting process and made helpful suggestions along the way.”

Bradford, Pennsylvania-based Kessel Construction, Inc. has certainly earned a reputation for building excellence — and an unwavering commitment to its customers, employees and community — over the past 85 years.

Today, the family owned and operated design-build business, which specializes in turnkey construction of commercial and industrial buildings, is widely recognized as a premier builder for numerous employers throughout western Pennsylvania and southwestern New York. Businesses, such as Southern Tier Brewing in Lakewood, Harley-Davidson of Jamestown in Falconer and Ralston Purina in Dunkirk, New York, as well as Niagara Plastic and Port Erie Plastics in Erie, Jim Coast Sales and Service in Duke Center and UGI Energy Services in Reading, Pennsylvania, have all trusted Kessel to handle some of their biggest construction jobs.

According to Jeff England, director of Project Management & Construction for UGI, Kessel Construction has been a valuable partner with the company and has played an instrumental role in support of its midstream and LNG capital projects. “Their willingness to integrate themselves into the design process, combined with their responsiveness in the field, make them a top contractor for our organization, as well as other oil and gas operators,” he says.

Jeff Horneman, support operations manager at Port Erie Plastics adds, “Kessel Construction has been a successful partner with Port Erie Plastics for the past 18 years. They built the first warehouse in 100 days and have added four additional warehouses/additions since then. We have always found them to be reliable, competitive, good to work with and they stand behind their work.”

Born in PA
Kessel’s work in the oil and gas industry spans three generations, dating back to 1934 when founder William Oscar (“W.O.”) Kessel began providing onsite construction services for the oil fields in McKean County. Kessel was responsible for building the “dog houses,” or wooden framed, metal roof structures, which were used as shelters for workers and to house equipment used by South Penn Oil Company (the present- day Pennzoil).

As demand for construction grew in PA’s oil country, so did Kessel’s business. By 1949, when Kessel made the strategic move to acquire a Butler Manufacturing steel building franchise, its business had skyrocketed.

“William Oscar was very wise to get involved with Butler,” explains President Tim Asinger. “We went from being just a small, niche player in McKean County, Bradford, Pennsylvania, to growing into one of the predominant design-build contractors in the area.”

Over the years, Kessel Construction expanded its services to include sheet metal, steel fabrication and concrete foundations, and the company thrived with a growing number of industrial and commercial building projects. In the late ‘70s, W.O. Kessel passed the torch to his son, Dick, who helped propel the company forward through Kessel’s quality work and unwavering commitment to customer service.

“People do business with people they like and trust, and fortunately we’ve had likeable people over the years and worked hard at earning their trust,” explains Dick Kessel. “Our goal has always been finding out what’s important to the customer, what they really want to build and their comfort level with construction, and then meeting their needs.”

With this customer-centric business approach, Kessel was able to dominate the marketplace in the northern tier of Pennsylvania and southern tier of western New York. In 1996, Asinger, Dick’s son-in-law, opened the company’s sales and marketing office in Erie and eventually rose to leadership roles as vice president and eventually president. In 2011, Asinger and his wife Kristin Kessel Asinger executed a succession plan for continuing the family construction business — and its tradition of exceptional service and support.

“The majority of business we do is repeat business,” explains Asinger of Kessel Construction’s secret to success. “We’ve been fortunate to have a strong base of business coupled with the legacy of a good reputation, good work and good value for the dollar.”

A Strong Brand, Services
Kessel has established itself as a strong brand made stronger by its 70 years as a Butler Builder. Today, the company maintains its position as one of the 10 oldest Butler Builders in the nation, crediting the Butler Manufacturing name and its pre-engineered steel buildings as the cornerstone for its growth, success and reputation as a high- quality builder.

“The Butler Building standing seam roof, MR24, for example, is really the Cadillac of the industry,” explains Dick Kessel. “You put it on a several hundred thousand square foot building and have no leaks; it’s very impressive.”

Mat Coast, general manager of Jim Coast Sales and Service in Duke Center, Pennsylvania, sought out Kessel to build a nearly 16,000-square- foot (Butler brand) steel building to house its Outdoor Power Equipment and Powersports dealership. “We chose Kessel for many reasons,” Coast explains, “but ultimately for their commitment to providing us with a quality product.”

According to Asinger, Kessel’s goal isn’t a “one-and-done” project; it’s building for a lifetime and providing high-efficiency systems and materials that can reduce a customer’s operating costs. “A lot of times what we do is we go back and try to work with the customer on anything that may come up with a facility over the life of the building,” he says. “We’ve really earned a reputation for delivering on what we promise and giving a good value for what we provide to our customers.”

With 35 highly skilled employees, Kessel operates as a one-stop shop (or turnkey operation), which means it can control costs by handling everything from site development and permitting through to job completion. The company also maintains its own equipment and self- performs concrete and steel work for the majority of projects.

“Once we start construction, we pride ourselves on fast tracking every project,” explains Asinger. “We want to be in and out of a project as quickly as we can, and we know most owners feel the same way. They can’t wait to get into their new facility.”

A Bright Future
As Kessel Construction looks forward to the future, the company has continued to gain distinction with its many industry recognitions.

Most recently, the company was presented with the $50 Million Dollar Lifetime Volume Award, the High Performance Builder Award and Million Dollar Builder Award at the 2019 Butler Manufacturing national sales meeting. Asinger also was presented with the Falcon Club award, which recognizes his two years of service on the Butler National Advisory Board and service to his fellow Butler Builders.

Company representatives agree that Kessel Construction is positively positioned for success as it embarks on the next 85 years.

“My vision is to just keep operating the company in a similar manner that William Oscar and Dick Kessel had of providing great value, competitive pricing, meeting expectations and delivering what we promised,” says Asinger.

Adds Dick Kessel, “Looking back on the business that my father built: going from the oil fields into industrial and commercial business; giving me the opportunity to learn the business and later taking over; and then to be able to see it continue and thrive to the next generation, I think he’d be very pleased.”