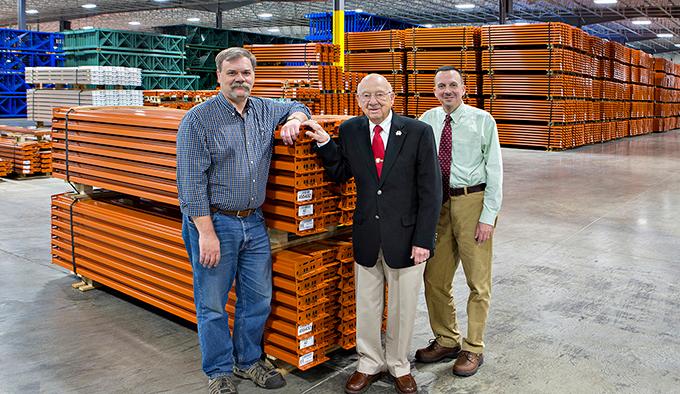 Those are the words that come to mind when describing Ridg-U-Rak, Inc., one of largest privately held storage rack and pallet rack providers in North America.

Owned and operated by the Pellegrino family, Ridg-U-Rak is widely recognized for its innovative and quality rack products, as well as for its longstanding contributions to advancing manufacturing and career opportunities in northwest Pennsylvania (NWPA). With 320 employees, the
company is one of the largest employers in North East, Pa., with three state-of-the-art locations, including two production facilities covering 160,000 square feet and a 5 1/2-acre warehouse and distribution center added in 2018.

President and CEO John B. Pellegrino Sr., P.E., who leads the company with his two sons, John Jr. and Mark, attributes many factors for Ridg-U-Rak’s longevity and long-term success. “Family ownership coupled with a constant focus on building a customer-centric organization, lean operational principles, continuous reinvestment into the business, maintaining a strong financial position, and creating a highly positive atmosphere by taking care of our employees have all contributed to what Ridg-U-Rak is today.”

The American Dream
Ridg-U-Rak has been a staple in the NWPA business community since
1942 when it began producing industrial storage racking as part of the
push to modernize America’s warehousing needs following World War II.

At that time, there were virtually no companies like Ridg-U-Rak that
existed, and even though it was limited in marketing and automation, the
company had survival strengths that allowed it to grow.

But the story of its growth and market position is really the story of the
American Dream thanks to the dedicated and visionary leader Pellegrino,
who joined the company as vice president of Sales and Engineering back
in 1975.

During the Great Depression, the Warren and Forest County native
was inspired to become an engineer while watching his father and
grandfather build the railways that would support the logging industry
in rural Pennsylvania. One day, Pellegrino says he spotted an engineer,
surveying the project and clearly standing out among the laborers in
a suit and tie. At age 6, he knew it was the career for him. From there,
he worked odd jobs and passionately pursued his studies to make his
dream come true.

“I’m a big believer in education but you have to have marketable skills,”
Pellegrino says. “I couldn’t have managed my business without it.”

After high school, Pellegrino served his country proudly in the Korean
War before returning home ready to earn his degree in civil and
structural engineering from Tri-State University in Indiana. From
there, Pellegrino worked as a registered professional engineer for 14
years when opportunity came knocking at the little known North East,
Pennsylvania company — Ridg-U-Rak, Inc.

Although it was small in size, the company held big opportunities for
Pellegrino to make a lasting mark. He was hired and soon became
involved in all aspects of the company, from engineering and product
design to development, marketing and sales. When the business became
available, Pellegrino seized the chance to make it his own and never
looked back.

Read more in the June 2020 edition of the Business Magazine.