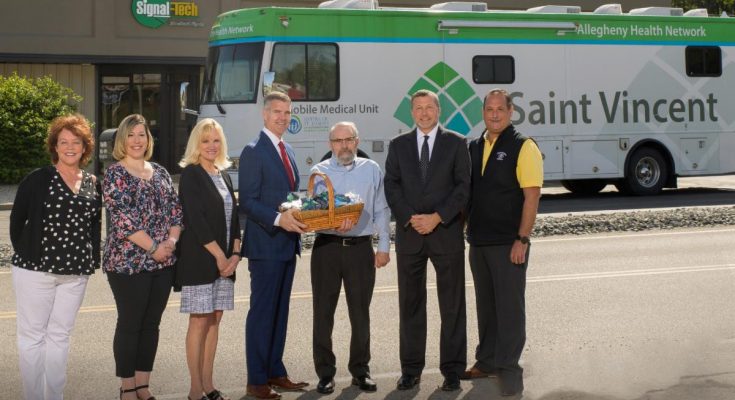 More than a year after COVID-19 erupted around the world, the United States is starting to experience some semblance of normalcy as restrictions are lifted and vaccination numbers rise.

Among the organizations that have worked tirelessly to keep our community and workplaces safe is Erie’s AHN Saint Vincent Hospital — part of the Allegheny Health Network and Highmark Health — and Highmark Blue Cross Blue Shield.

The hospital and insurer have a long history of dedication to providing high-quality health care in the region, and their collaboration on pandemic-related initiatives reinforces this mission. From education, testing and treatment, to donations and vaccinations, the two organizations have been critical to both response and recovery efforts, especially in the areas of population and occupational health.

Chris Clark, D.O, MHA, president of AHN Saint Vincent, and James Teed, vice president of Regional Markets for Highmark, are proud of what their organizations have accomplished in a year fraught with uncertainty, and have been thankful for the overwhelming support they’ve have received so far.

“I can’t tell you the countless number of letters, phone calls, and texts I have received,” Clark says. “I’m grateful for the community stepping up and recognizing our team, especially those on the front lines who were actively involved in taking care of our patients.”

Taking Action: From Testing to Treatment and Prevention

Early on, AHN Saint Vincent’s medical professionals provided vital guidance on mitigation efforts and how to identify COVID-19 symptoms. As demand grew, the hospital quickly provided essential staffing for testing sites that included AHN’s West Side Pavilion, AHN Saint Vincent Hospital and its Emergency Department, and a special testing site at the Martin Luther King Center through a partnership with the Erie County Health Department.

“The testing sites were extremely busy,” Clark says, noting that more than 16,000 COVID tests have been administered to date.

AHN Saint Vincent Hospital reacted quickly to prepare safe, isolated, negative air-flow spaces to treat over a thousand inpatients, both critical and non-critical, for COVID to date. At the height of the surge locally, the hospital reported an average of 54 hospitalizations a day in December with a peak of 74 during November to early January.

Since the COVID vaccine became available, AHN Saint Vincent has administered 57,000 doses of vaccine, from a hospital-based clinic site to mobile clinics at neighborhood centers, churches, rural communities, schools, a mass vaccine site at Erie Insurance Arena, and even a clinic aboard a cargo ship docked in Erie’s port.

“We know the vaccines are safe and effective, and we’re seeing significantly lower hospitalizations, so we know they’re working,” Clark says.

Clark and his team are committed to reducing that number even further through continued education and vaccination efforts that will help lower transmission rates and reach herd immunity. He encourages employers to support education efforts and to think creatively to incentivize employees to get vaccinated — i.e., recognition, paid time off or gift cards, as other businesses have done. “I’m not endorsing any particular method, but I would just encourage positive reinforcement to get people vaccinated,” he says. “Every little bit helps.”

Read more in the July 2021 edition of the Business Magazine.