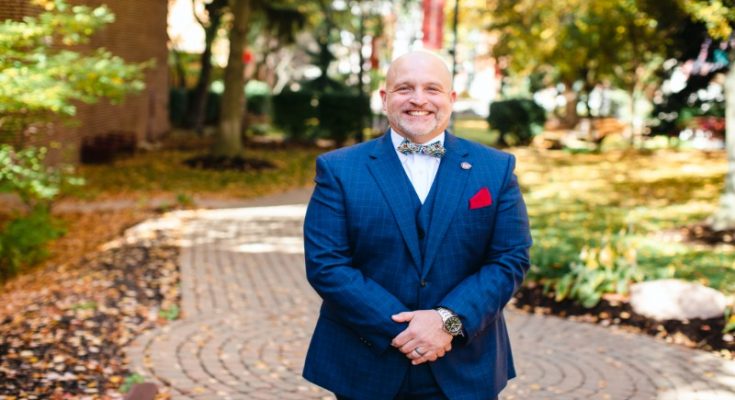 ERIE – Walter Iwanenko Jr., Ph.D., an occupational therapist and epidemiologist whose six-year tenure as Gannon University’s provost and vice president for student experience has earned him a reputation as a creative problem solver and an advocate for academic excellence, has been selected as the university’s eighth president.

The university’s Board of Trustees voted October 31 to appoint Iwanenko, 52, to succeed Keith Taylor, Ph.D., who announced in August that he will step down as president effective June 30, 2023. Iwanenko will begin his new duties on July 1, 2023.

“We are delighted to announce Dr. Iwanenko will be our next president,” said the Most. Rev. Lawrence Persico, J.C.L., Bishop of the Diocese of Erie and chairman of Gannon’s Board of Trustees. “He has contributed much to the university in his role as a vice president and provost, and we have even higher expectations for him and the university when he assumes his new role next year.”

Iwanenko’s appointment as president-elect follows a nearly six-month campus-wide process that was assisted by Academic Search.

More than 800 faculty, staff and students responded to the Leadership Transition Committee’s survey in early September. Those responses helped form the presidential profile against which Iwanenko was vetted in early October.

About 275 attended open forums with Iwanenko, and another 150 participated in interviews with him. The overwhelmingly positive feedback from those meetings informed the 13-member Committee’s recommendation to the Board of Trustees.

Tina Donikowski ’85, a Gannon trustee and chairwoman of the Leadership Search Committee, said Iwanenko distinguished himself throughout the process.

“We were fortunate to have had a succession plan in place and that Dr. Iwanenko presented himself so well,” she said. “As a committee and as a board, we were prepared to take the search nationally if that was indicated, but Dr. Iwanenko proved to us he is ready for this role. He has the institutional knowledge, the aptitude and a commitment to both the university and to its Catholic traditions to advance Gannon’s positive momentum.”

Iwanenko, who worked at Hilbert and D’Youville colleges prior to joining Gannon in 2016, offered a few remarks during an announcement and brief reception in the Yehl Ballroom on November 3.

“I am humbled by the privilege to serve as president at this pivotal juncture in our university’s life,” he told those gathered in person and those watching via a livestream.

“At Gannon, I have been blessed to serve on a team that has maintained financial discipline, improved academic programs, grown enrollment and expanded its footprint – in Erie, Pa., and in Ruskin, Fla. Although building on this success may be met with challenges in the next several years as the competition for students increases and their demographics and needs change – we must and we will remain steadfast in achieving our Mission while delivering a quality education at an affordable price. I welcome this leadership challenge and believe that challenge creates opportunity and I have full confidence in the determination of our Gannon community to learn, adapt and prosper,” he said.

Iwanenko’s family has already set down roots in Erie and at Gannon. His wife, Mary, is an alumna of Gannon and is the director of the university’s Health Center, and their son earned his bachelor’s degree at Gannon and is pursuing a graduate degree too. They also have two daughters, one who lives in Buffalo and another in Erie.

“Our entire family shines with Gannon pride,” he said.

Iwanenko’s selection as president opens a vacancy in the provost and vice president for student experience position.

A search committee will be named in the coming week and a position profile will be created shortly thereafter.

“We will be assisted in this effort by Academic Search and we anticipate having a new provost in place when Walter begins his tenure as president on July 1, 2023,” Taylor said.