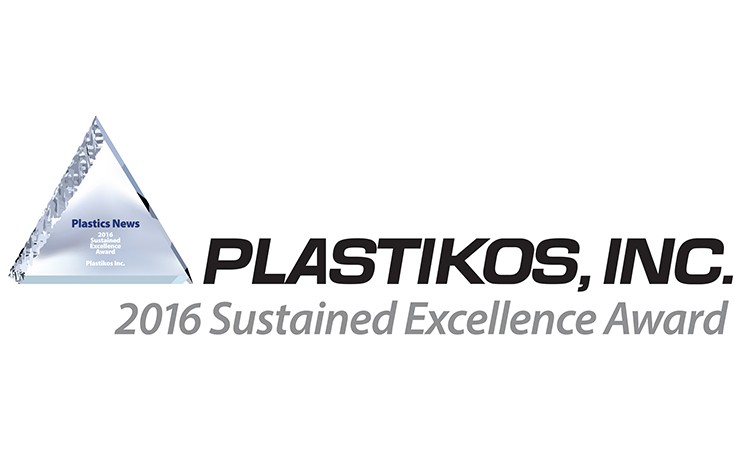 ERIE – Plastikos, Inc. was named the “2016 Sustained Excellence” award recipient, presented by PlasticsNews earlier this spring in Naples, Flordia. The exclusive Sustained Excellence award that is limited to companies that previously won the North American Processor of the Year award (POY Award), which Plastikos earned in 2010.

“The entire Plastikos & Micro Mold Team is extremely honored to be presented with the “2016 Sustained Excellence” award, seven years after Plastikos was named the “North American Processor of the Year” by PlasticsNews,” said Philip Katen, Plastikos’ president and general manager. “Plastikos & Micro Mold remain strongly committed to our ‘100% Made in the USA’ strategy, and we believe that our Team affords the highest value for our customers’ hard earned dollar. And the Sustained Excellence award recognizes the hard work and dedication of our Team, who strives to exceed our customers’ expectations every day.”

Plastikos was recognized for the company’s growth and continued operational excellence along with its impressive capital equipment reinvestment throughout the past 7 years. The core values of Customer Service, Teamwork, Professionalism, Respect, and Continuous Improvement have defined the Plastikos & Micro Mold culture since its founding in 1978, almost 40 years ago.

Plastikos’ Manufacturing Manager Robert Cooney stays particularly close to continuous improvement projects. “Over the past 10 years, Plastikos has reinvested heavily in an effort to position itself at the very top of the injection molding industry and our investment in cutting-edge technology has directly benefited our customers and our employees,” he said.

All former Processor of the Year (POY) award-winning companies that were considered for the 2016 Sustained Excellence Award needed to demonstrate excellence in the following areas (in addition to being a previous POY winner):

Plastikos earned high remarks in all categories. For example, Plastikos sales over the last seven years (2010 – 2016) have increased more than 50 percent. Plastikos realized impressive sales growth from both its long-term customer base as well as from the addition of multiple strategic medical device accounts. Moreover, Plastikos built a state-of-the-art ISO 7 (Class 10,000) cleanroom medical center complete with eight new cleanroom molding machines in 2015 to support the growth of its medical device customer portfolio.

Plastikos also was recognized for its outreach efforts within the Erie, PA community. Over the last three years alone, Plastikos hosted more than 18 interactive student plant tours that focused on continued education and career development for those local students. During these tours, well over 100 students ranging from grade school to high school have been exposed to Plastikos’ industry-leading manufacturing operation and to the larger plastics industry.