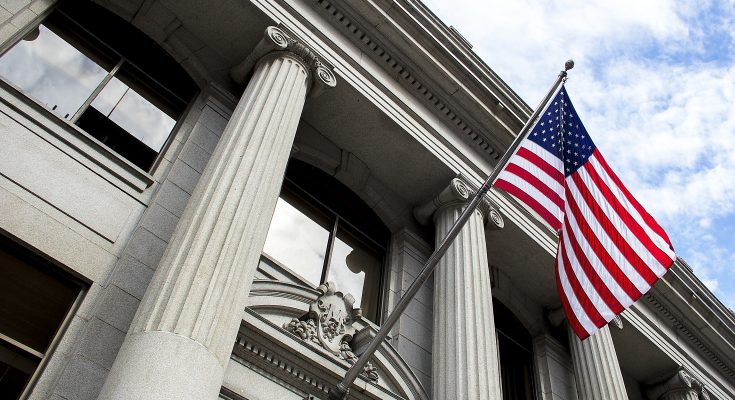 Most Pennsylvanians have heard of the Freedom of Information Act (FOIA), which governs every U.S. citizen’s right to request and receive public records from the federal government. You may not realize, however, that our right to public information in Pennsylvania is governed by the Commonwealth’s Sunshine Law, a series of laws guaranteeing that our state’s citizens have access to state and local public records. Perhaps most important is the Right to Know Law (RTKL), Pennsylvania’s version of FOIA. RTKL is critical for both protecting and discovering public records, and a legal battle over our right to know public information is currently being waged across the Commonwealth.

A decade ago, Pennsylvania’s open records laws were considered to be among the worst in the nation. Under the old law, secrecy was the norm. State and local records were largely presumed to be inaccessible by the public, which mirrored a 2001 U.S. attorney general memorandum mandating a presumption of protection, borne in part out of a need to safeguard national security documents during the post-9/11 global war on terror.

With passage of the OPEN Government Act in 2007, the federal stance on public records abruptly changed to a presumption of disclosure. Pennsylvania again mirrored federal law as state lawmakers enacted RTKL in 2009. Rather than a presumption of protection, RTKL shifted the burden to the Commonwealth to justify withholding records requested by its citizens. In addition, RTKL created Pennsylvania’s Office of Open Records to handle public records appeals and identified the public bodies that are subject to the law, including not only state and local executive agencies, but also the legislature, the judicial branch, privatized government agencies and certain public educational institutions.

Argus Leader and the Future of RTKL

Under the presumption of openness, a business could invoke a FOIA exemption to prevent public release of its commercial or financial information only by demonstrating that disclosure would cause substantial competitive harm. In June 2019, the U.S. Supreme Court’s decision in Food Marketing Institute v. Argus Leader Media rejected this long- held substantial harm test and instead concluded that information should be protected whenever it is actually treated as private by its owner and provided to the federal government under an assurance of privacy.

Eighteen months later, Argus Leader’s impact is still unclear. If history is any indication, the federal pendulum could be swinging back toward a presumption of protection. If so, would RTKL swing right along with it? Unlike FOIA’s general exemptions, RTKL identifies 30 specific types of records that are exempt from disclosure. Nevertheless, state and local agencies must determine whether a requested record falls under one of the enumerated exemptions, and with RTKL being only 12 years old, there are relatively few court opinions forging a strong presumption one way or the other.

Advocates for open records in the Commonwealth see this gap as an opportunity to create favorable case law for more transparency, including two highly publicized court battles in York seeking to help Pennsylvania journalists gain access to previously sealed government records. Plus, the battles aren’t limited to the courts. Open records advocates also are calling for more action in the state legislature, saying that transparency is a bipartisan issue that all Pennsylvanians should support.

Pennsylvania businesses should keep an eye on how our courts and lawmakers continue to shape RTKL. Doing so can help you effectively utilize RTKL to discover valuable business information submitted to state and local agencies — and to protect your own. 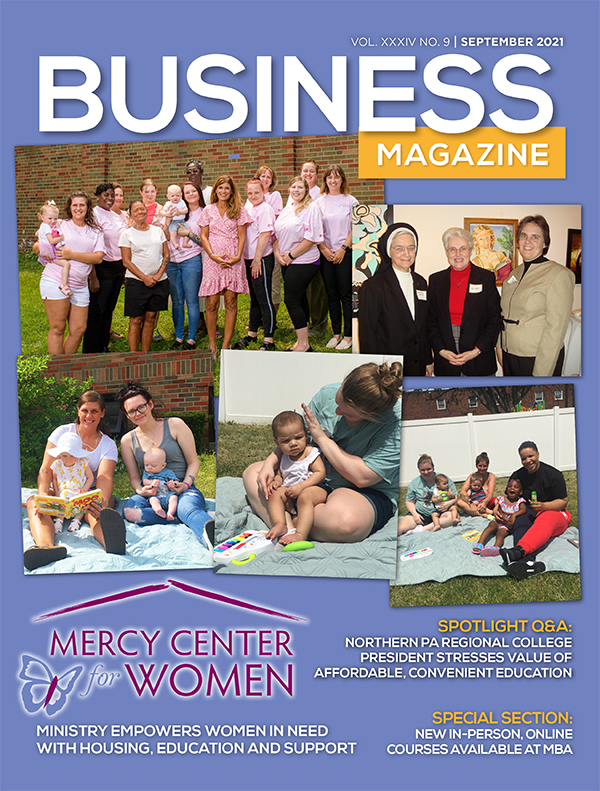 Mercy Center for Women
A sponsored ministry of Sisters of Mercy in Erie, Pennsylvania, the 501c3 charitable social service organization has been empowering homeless women, many of whom with young children, on their road to recovery and self-sufficiency since 1994.

Learn more about the organizations that are building for the future in November’s Business Magazine! In this issue, we’ll explore some the exciting resources available — from architecture, surveying and construction firms to consultants, law firms, real estate agencies and banks — as well as some recent infrastructure updates and investments that are under way! Click here for details! 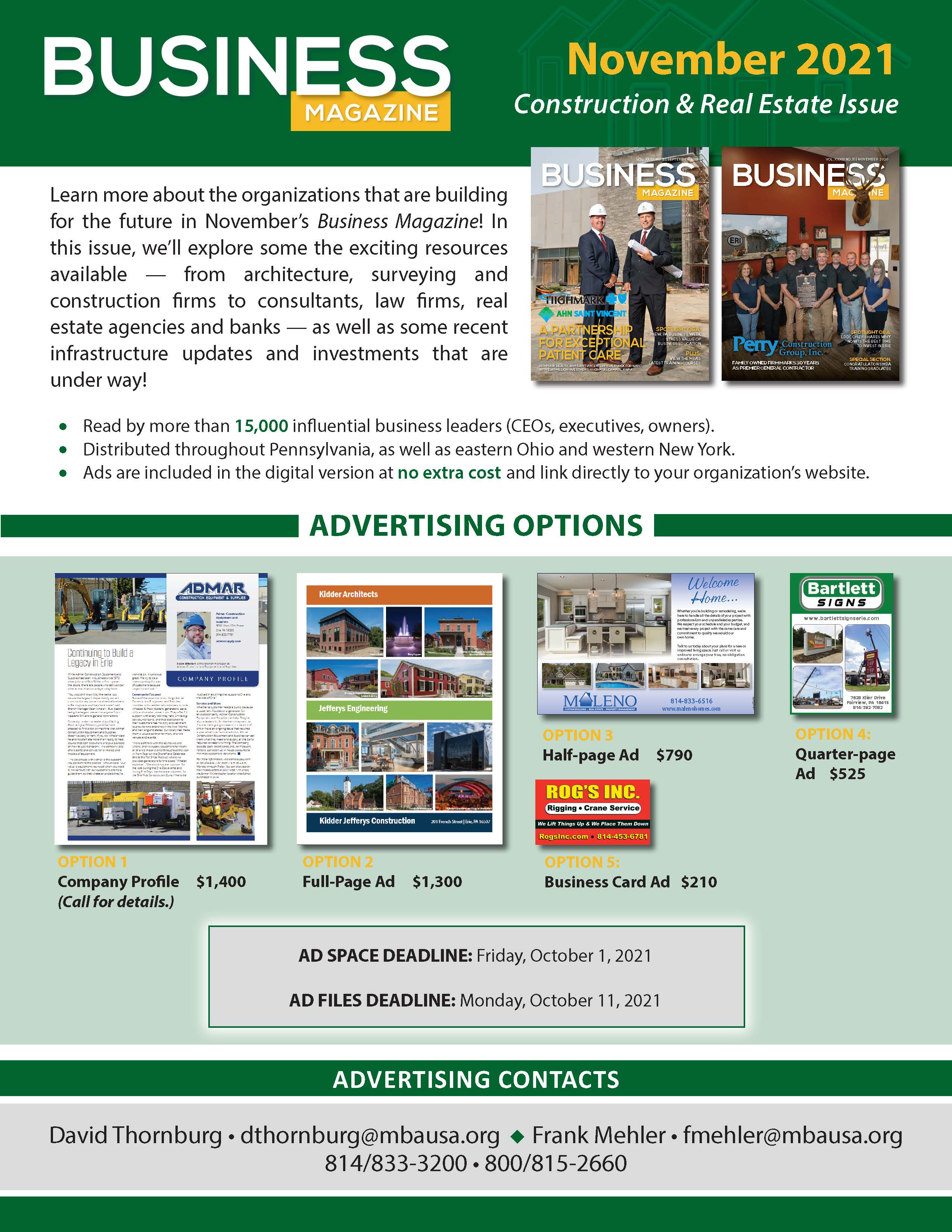 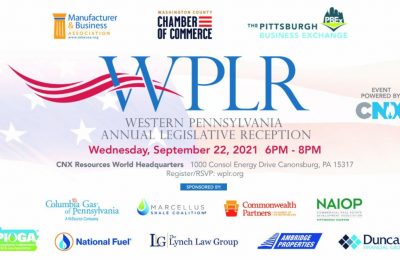 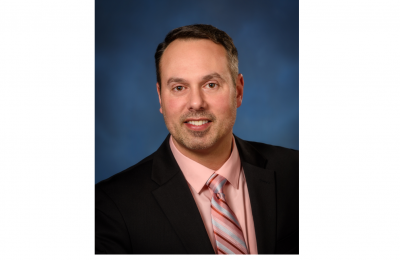 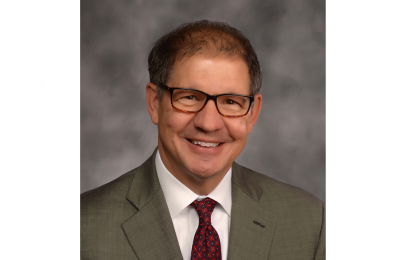