Home On The Hill 2022 Election Forecast 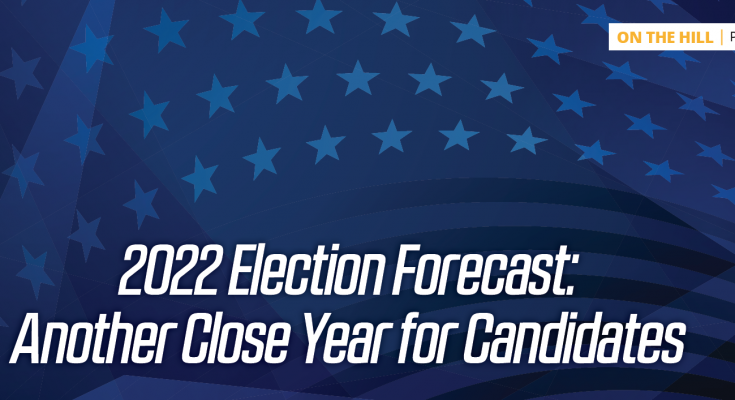 Another Close Year for Candidates

Pennsylvania has become one of the most politically competitive states in the country, having metamorphosed into deep purple. A decade ago, Democratic candidates had the luxury of a million more registered voters than Republicans. In just a short time, that number has been cut in half and continues to shrink.

The last two governor’s races have been landslide victories for Democrat Tom Wolf, but other statewide races have been very close. This can be contributed to two reasons. First, a provision — not given much attention in the now controversial “Act 77” — removed the option for a straight party ticket vote, giving many voters permission to cast a more educated decision. Secondly, while there are more Democrats in Pennsylvania, many are much more moderate than their counterparts in places like San Francisco. Their party affiliation is often attributed to family and union ties and influenced by economic indicators.

However, the same electors split their ticket. Republican Tim DeFoor won the race for Auditor General by 3 percent, and Republican Stacy Garrity won the State Treasurer’s office over a sitting incumbent by less than 1 percent.

Now, Governor Wolf is constitutionally limited to two, four-year terms, making the race for Pennsylvania’s next governor an open seat. It was largely known in government and political circles, Attorney General Josh Shapiro’s re-election campaign in 2020 was footing for his goal to replace Wolf. Coupled with his strong fundraising ability, he cleared the path and ran unopposed for the Democratic nomination in May.

On the Republican side of the aisle, Pennsylvania State Senator Doug Mastriano faced a crowded field with eight others on the ballot. Mastriano made a statewide name as an outspoken critic of the Wolf administration’s business closures during the COVID-19 pandemic. Even though he was vastly outspent, he rallied a large amount of grassroots support and handily won with over 43 percent of the vote, 23 percent more than the second-place finisher.

U.S. Senator Pat Toomey is not term limited, but after serving two, six-year terms choose not to run again to create an open seat. Most political pundits have this race as a toss-up. What was thought to be a competitive Democratic primary was handled with ease as Lieutenant Governor John Fetterman won with a landslide 58 percent of the vote, 32 percent more than second place. Before running for lieutenant governor, Fetterman had previously unsuccessfully ran for U.S. Senate only to lose in the primary. He has a strong online presence and after visiting every county more than once, wields commanding grassroots support.

Mehmet Oz, from the daytime television show, “Dr. Oz,” came on the Pennsylvania political scene last December and won, what came to be a three-way race for the Republican nomination, by less than 1,000 votes. Oz touts name recognition, large crowds and seemingly stops at every diner he crosses.

Recent polling has shown over 10 percent of Pennsylvania voters are up for grabs. Those voters will make their decisions after the much-anticipated heavy television, mail and digital advertising that will hit its stride in October.

Democrats are facing strong political headwinds as the economy is consistently cited as the Number One issue. Additionally, Pennsylvania voters have 54 percent and 46 percent unfavorable views of President Biden and Governor Wolf, respectively. Worth noting, only 17 percent of Pennsylvanians see their standard of living better than it was four years ago. Given the continued rise in inflation, that number won’t be going down. Lastly, 54 percent say Pennsylvania is on the wrong track.

If traditional wisdom that a grassroots base goes a long way holds, this will be another close election, and we may see voters split their ticket again.

Jezree Friend is assistant vice president of External Relations at the Manufacturer & Business Association. Contact him at 814/833-3200, 800/815-2660 or jfriend@mbausa.org.