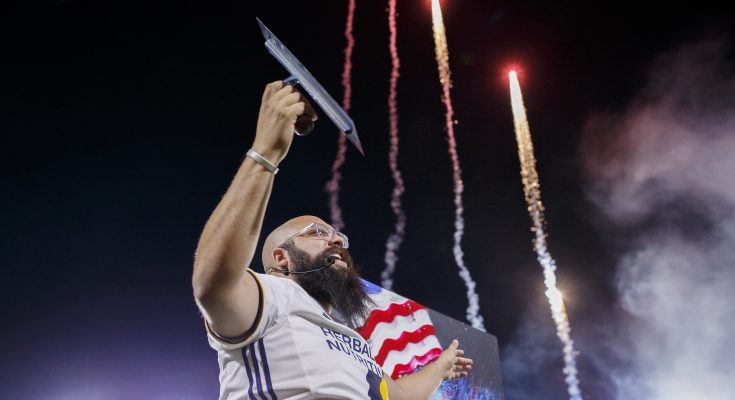 Joe Everson is a renaissance man — artist, vocalist, musician and photographer — and an Internet sensation. His viral videos of singing the National Anthem while painting a live-action artwork have garnered more than 220 million total views.

In fact, in just a matter of days, he’ll be bringing his performance to northwest Pennsylvania, too. On October 9, Everson will make a special guest appearance in Erie to perform “God Bless the USA” while creating a live-action, patriotic painting at the Manufacturer & Business Association’s (MBA) 114th Annual Event. His appearance is sponsored by National Fuel.

“We are very much looking forward to Mr. Everson’s performance,” says Association President John Krahe. “The combination of his voice and his artistry is so powerful, and the final product is a true masterpiece. We can’t wait for our members to see what he has in store.”

Everson gained notoriety back in 2016 at a Toledo Walleye game in Ohio. At that time, Everson sang the National Anthem while painting the iconic 1945 Iwo Jima photograph of soldiers raising the American flag. A video of the performance posted to social media went viral, which prompted a call from a producer at Fox & Friends. And he hasn’t looked back.

Previous PostAMERICAN BUSINESSWOMAN KAT COLE Next PostWE BRING THE BEST TRAINING TO YOU!