Home On The Hill Victory at Last! 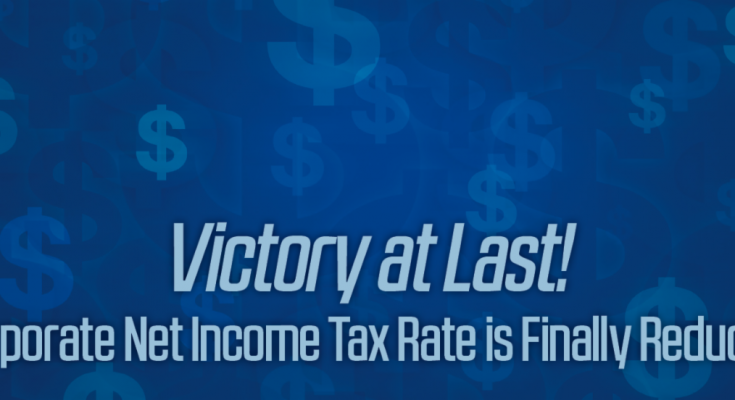 For one day, let’s luxuriate in the start of a phase-down for Pennsylvania’s Corporate Net Income Tax (CNIT) rate. Our 9.99 percent CNIT — which has been the highest flat rate in the country — has always been a “stop sign” for businesses considering locating to Pennsylvania.

Beginning January 1, 2023, the tax rate will decrease one percentage point to 8.99 percent. Each year thereafter, the rate is scheduled to decrease 0.5 percentage points until it reaches 4.99 percent at the beginning of 2031. The full reduction takes PA from the highest flat CNIT rate in the country to the sixth lowest and marks the first change in the rate since 1995.

It is so easy to say, “Well, that’s good but now we need the Net Operating Loss percentage limitation to be phased out,” and “Yes, but now we need permitting reform.” True, but stop for one moment and enjoy a victory lap.

Take a deep breath, count to ten and visualize all of the invisible work of the MBA Government Affairs Department and many other advocacy organizations who have worked tirelessly, putting in hours and hours of strategy meetings and meetings with lawmakers to achieve the rate reduction.

If you have ever wondered, “Does advocacy really work? Is there a return on investment (ROI) or is it just like throwing money down a rabbit hole?” Now you know the answer. Yes, advocacy does work. It is the intangible benefit of an MBA membership.

Personally, it was a challenge to make the switch from running a small business to advocating for a pro-business

environment. Advocacy is not like running a business where there is a profit and loss statement to review, inventory to count and a ROI (sometimes). Those are concrete metrics. Working on legislation is much different. The results are not immediate or tangible; they are invisible. Advocacy requires patience, the ability to take the long view, working for what can be done politically known as “playing small ball,” the ability to compromise, and above all, persistence.

The MBA and, previously, SMC Business Councils have worked for years with the Compete PA Coalition where reduction of the state’s corporate net income tax rate has been at the top of their policy agenda.

According to Carl Marrara, executive director of the Pennsylvania Manufacturers Association, “This is the first major business tax reform package in decades.”

“In 1995,” Marrara continued, “then Governor Tom Ridge signed a tax code that lowered PA’s tax rate from 11.5 percent to the current 9.99 percent. As more overseas operations are being reshored, states are competing for business talent, capital and investment.”

You may wonder why the CNIT rate reduction took so long and how was it finally accomplished. State lawmakers worked in a bipartisan manner and Governor Tom Wolf did not insist on attaching provisions that would erase the benefits of the CNIT reduction. Here’s how the vote played out for this year’s tax code, House Bill 1234, part of the budget, that included rate reduction: The House voted 184-16 and Senate 38-12.

To increase your understanding of how the MBA Government Affairs works for members, know that we join with several coalitions to accomplish legislative goals. The Power PA Jobs coalition opposes Pennsylvania’s entrance into the Regional Greenhous Gas Initiative (RGGI), The PA Coalition for Civil Justice Reform does as its name implies, and Stop New Energy Taxes lobbies against severance taxes.

The MBA partners on occasion with Pittsburgh Works Together, the Greater Pittsburgh Chamber, PA Chamber, NFIB, the Commonwealth Foundation and others.

Our goal is always to do what is in the best interest of you, our members.