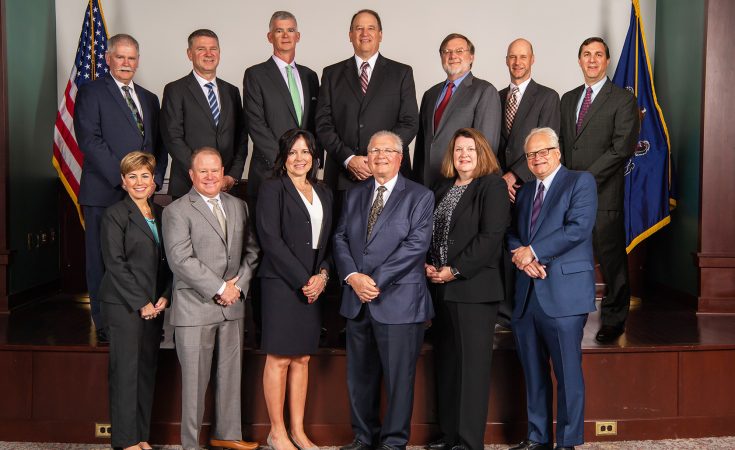 ERIE – The Manufacturer & Business Association (MBA) recently announced its 2019-2020 Board of Governors, including members of its Executive Committee.

Chairman Mike Mankosa, is executive vice president of Global Technology, Eriez Magnetics, a world authority in separation technologies, headquartered in Erie. Mankosa is responsible for guiding Eriez’ product technology focus, leading the collaboration of Eriez’ technical expertise across global enterprises and directing the development of technology solutions to enhance Eriez’ strategic goals worldwide. Mankosa joined Eriez in 1997, beginning his career as the company’s technical director in the Erie-Division Research and Development Lab. He earned his doctorate in mining and minerals engineering from Virginia Tech.

New MBA Board members include:

For a one-year term, Dave Carlson, vice president of Sales & Marketing at Creekside Springs, LLC, a water bottling business headquartered in Ambridge, Pennsylvania. Beginning in 2008, he was an investor in the company and assumed an active day-to-day role in operations in November 2010. Focused on producing contract package and private label water products for brand owners, grocery retailers, convenience stores and home office delivery companies, Creekside Springs has been in operation since 2003 and operates three production facilities in Pennsylvania and Ohio employing more than 70 people. Carlson’s responsibilities include sales, marketing and human resources, as well as evaluation of new business opportunities and strategic partnerships.

Prior to business ownership, Carlson was employed for 30 years primarily in brand management and marketing roles for Clorox and PPG Industries and held senior management positions in two Pittsburgh-based advertising and marketing communications firms, Mullen and Dymun and Company. He also served as chairman of SMC Business Councils (SMC), which recently merged with the Manufacturer & Business Association. A native of Rochester, New York, Carlson earned his undergraduate degree from UCLA (Economics and Political Science) and Master of Public Management degree from Carnegie Mellon University.

As a registered nurse, she practiced in the area of Critical Care before leading PCMSI. She is a former board member for the Telescan Users Network (TUNe), an organization of business owners involved in the telecommunications industry. She is also a proud member of the board of directors for Erie Dawn, a local nonprofit that advocates for women in need. Uht was inducted into the Villa Maria Presidents Hall of Fame in 2015. 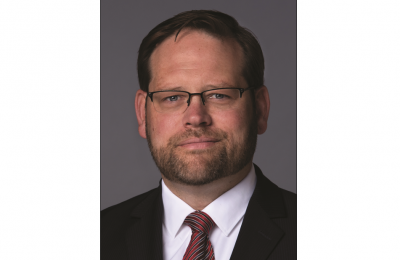 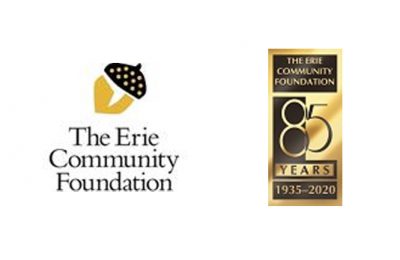 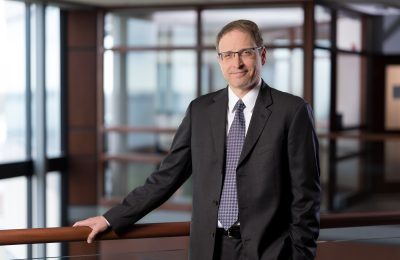 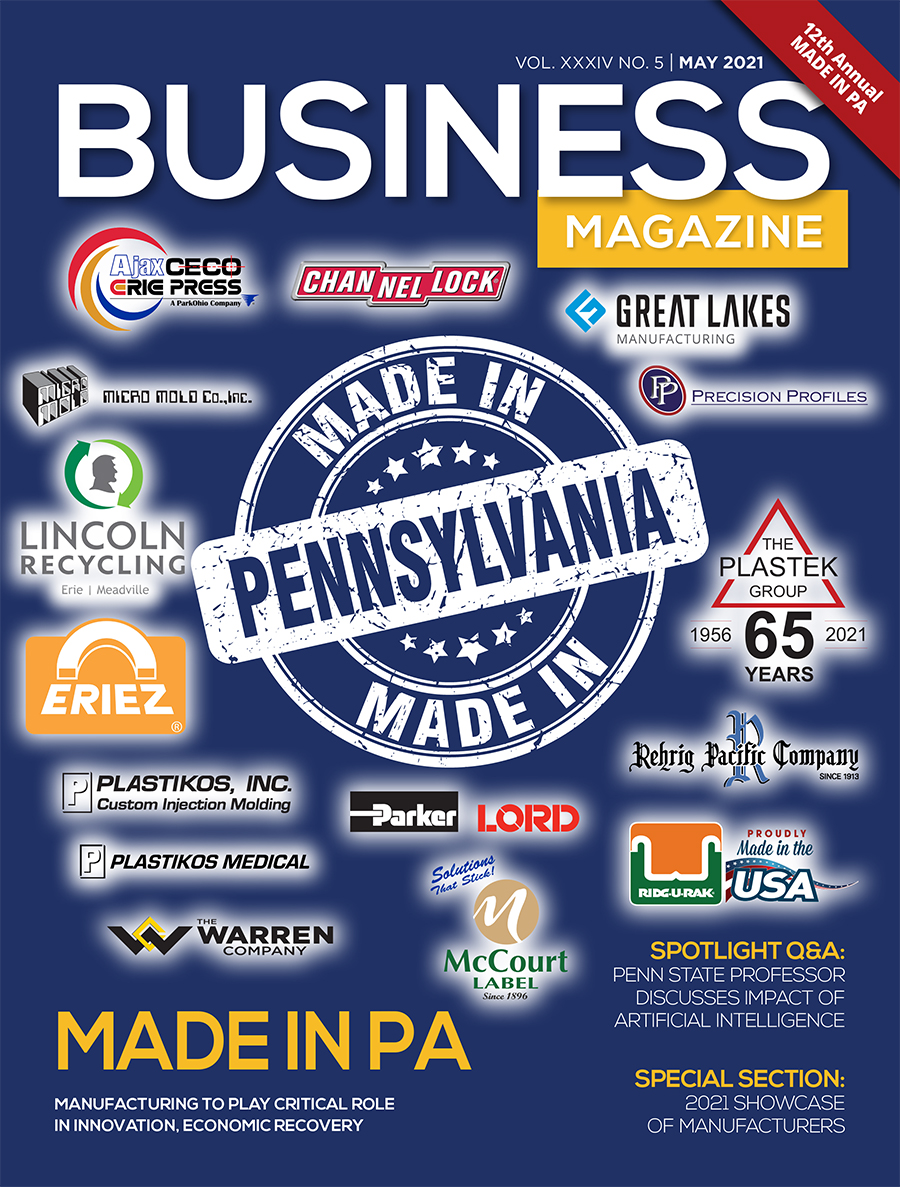 Made in PA
Manufacturers have played a pivotal role in Pennsylvania’s prosperity – through innovation and investment – and will be critical to its post-COVID-19 recovery, as well.

In our JULY issue, help us recognize the individuals and nonprofit organizations that give back to our community, providing invaluable resources to keep our area thriving! Click here for details! 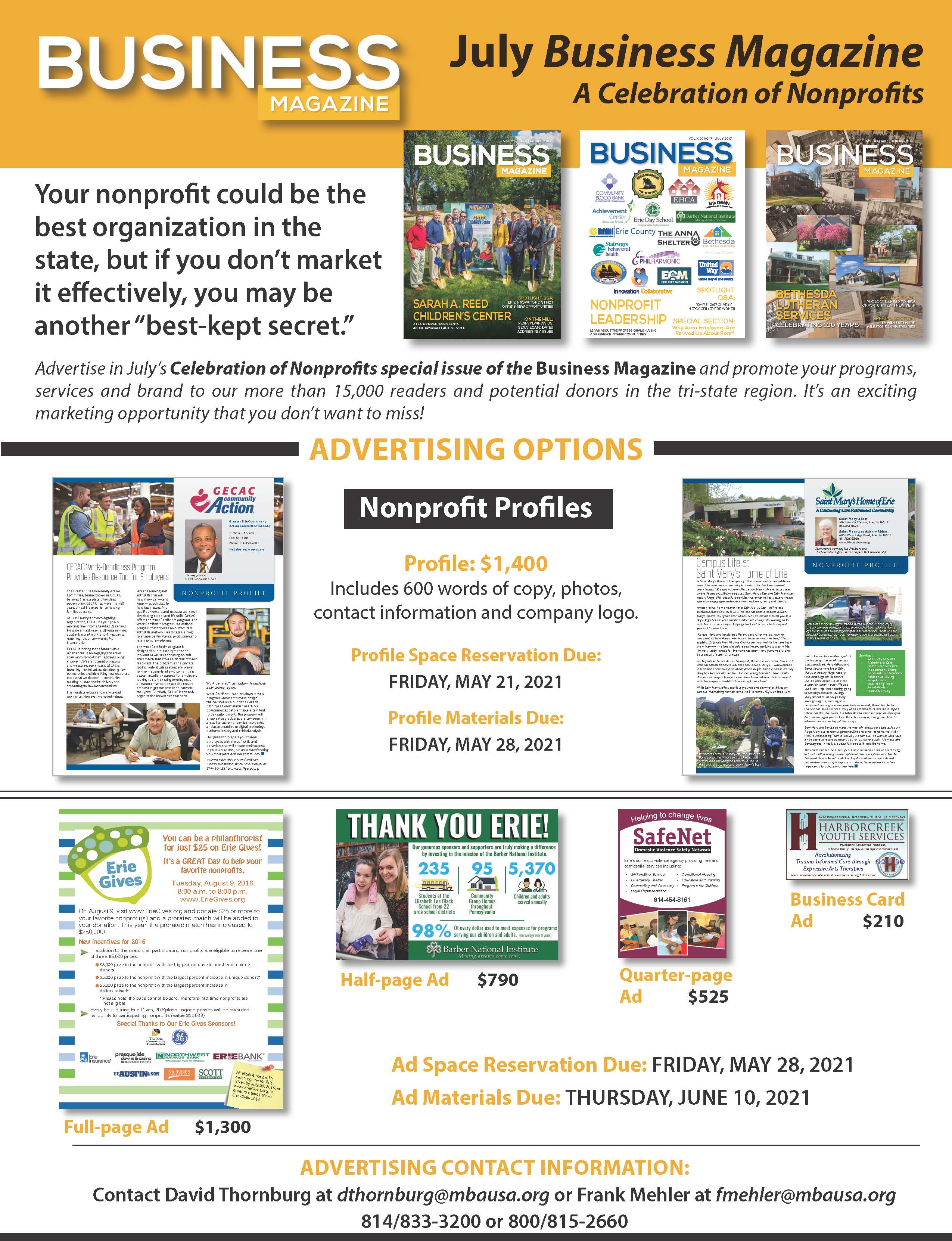 As August approaches, our editorial focus is on “Transportation and Logistics.” The keys to keeping our economy and businesses moving in the right direction — and around the globe — will be discussed.

Showcase the providers and programs — and expertise — that can help employers navigate the challenges ahead. Click here for details! 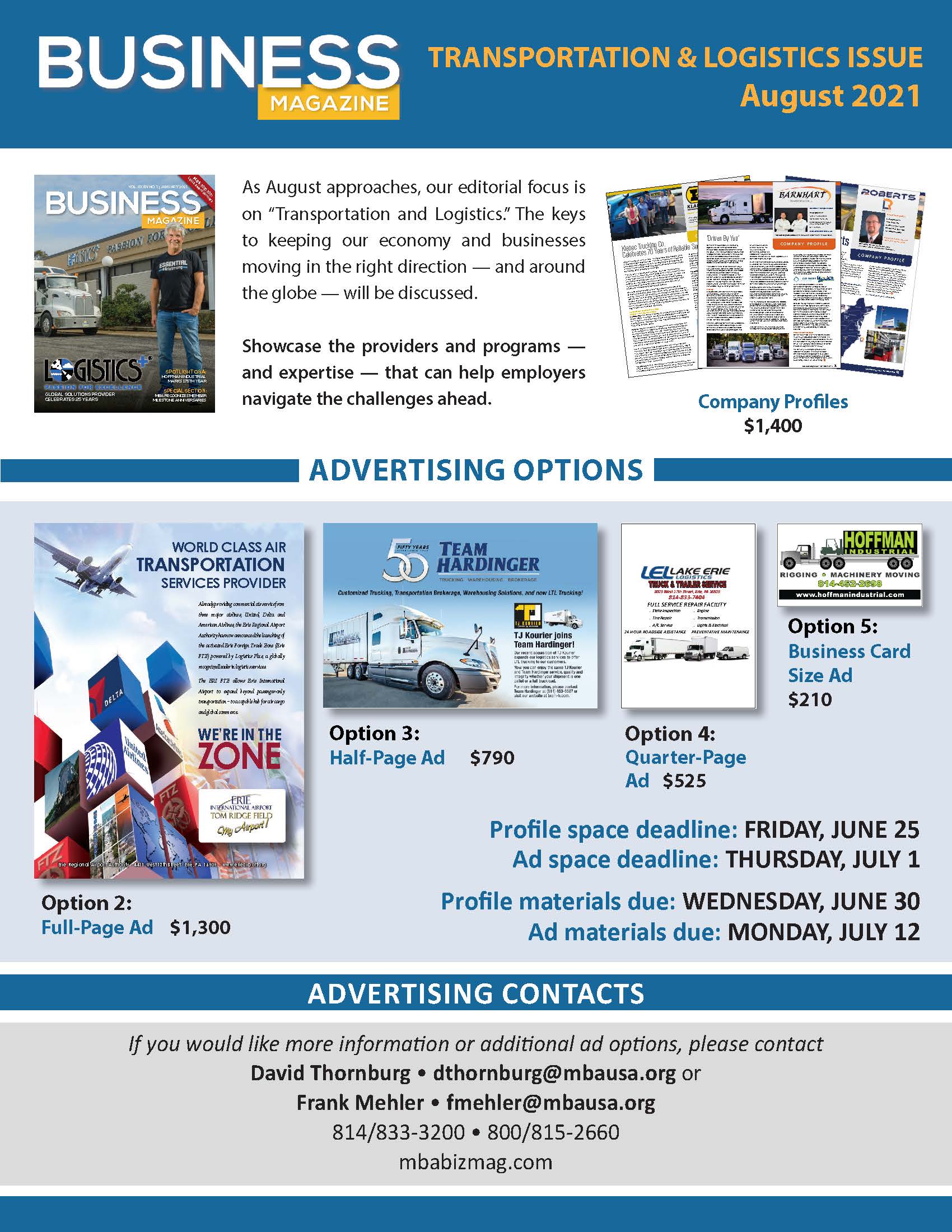 EARLY BIRD SPECIAL! Lock in special rates for this year’s Annual Report – our biggest issue of the year! Click here for details! 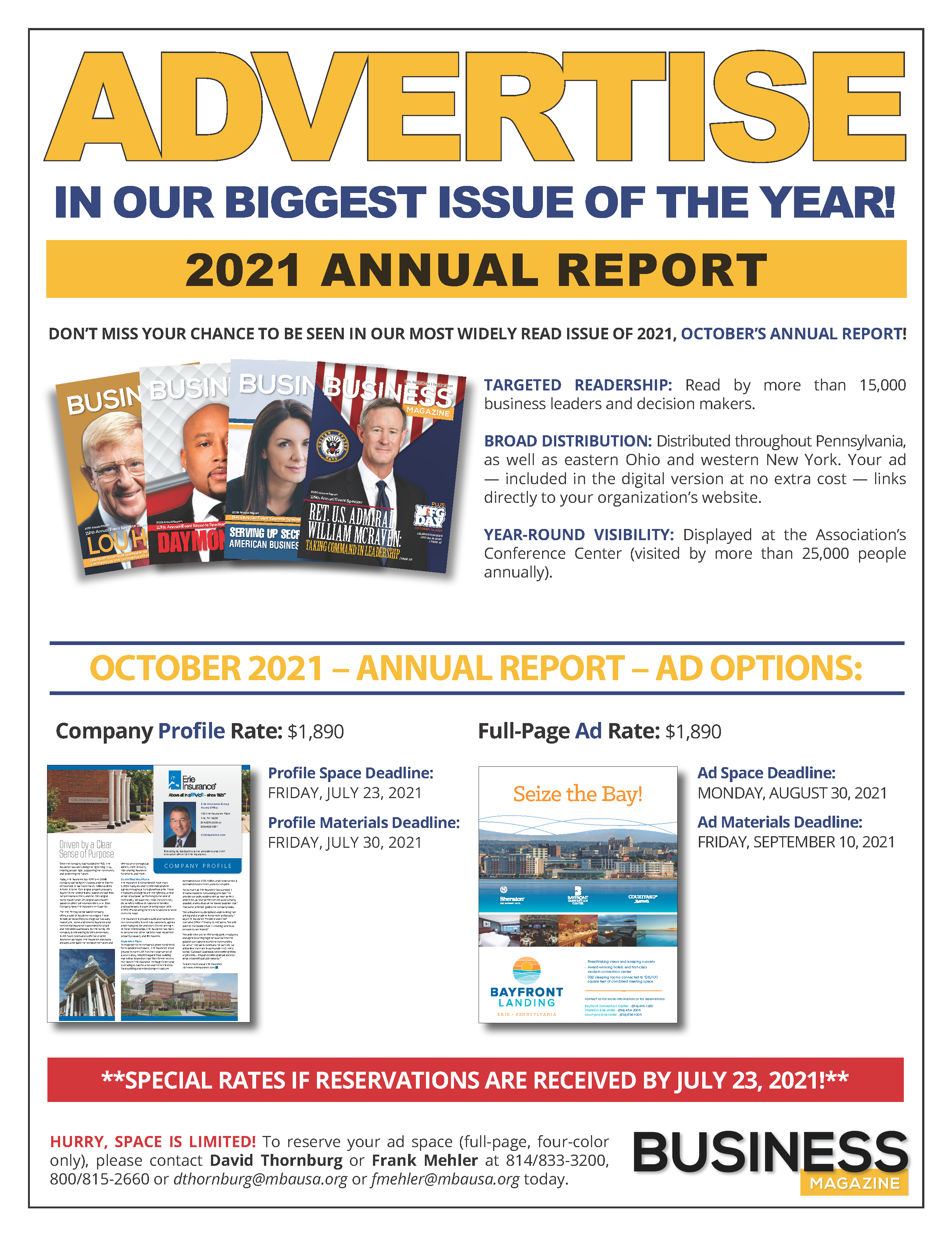 Join us on May 20 for this special VIRTUAL briefing as we hear from a local expert on the topic of artificial intelligence. Click here to register now! that need a special finish on them to prevent rust. 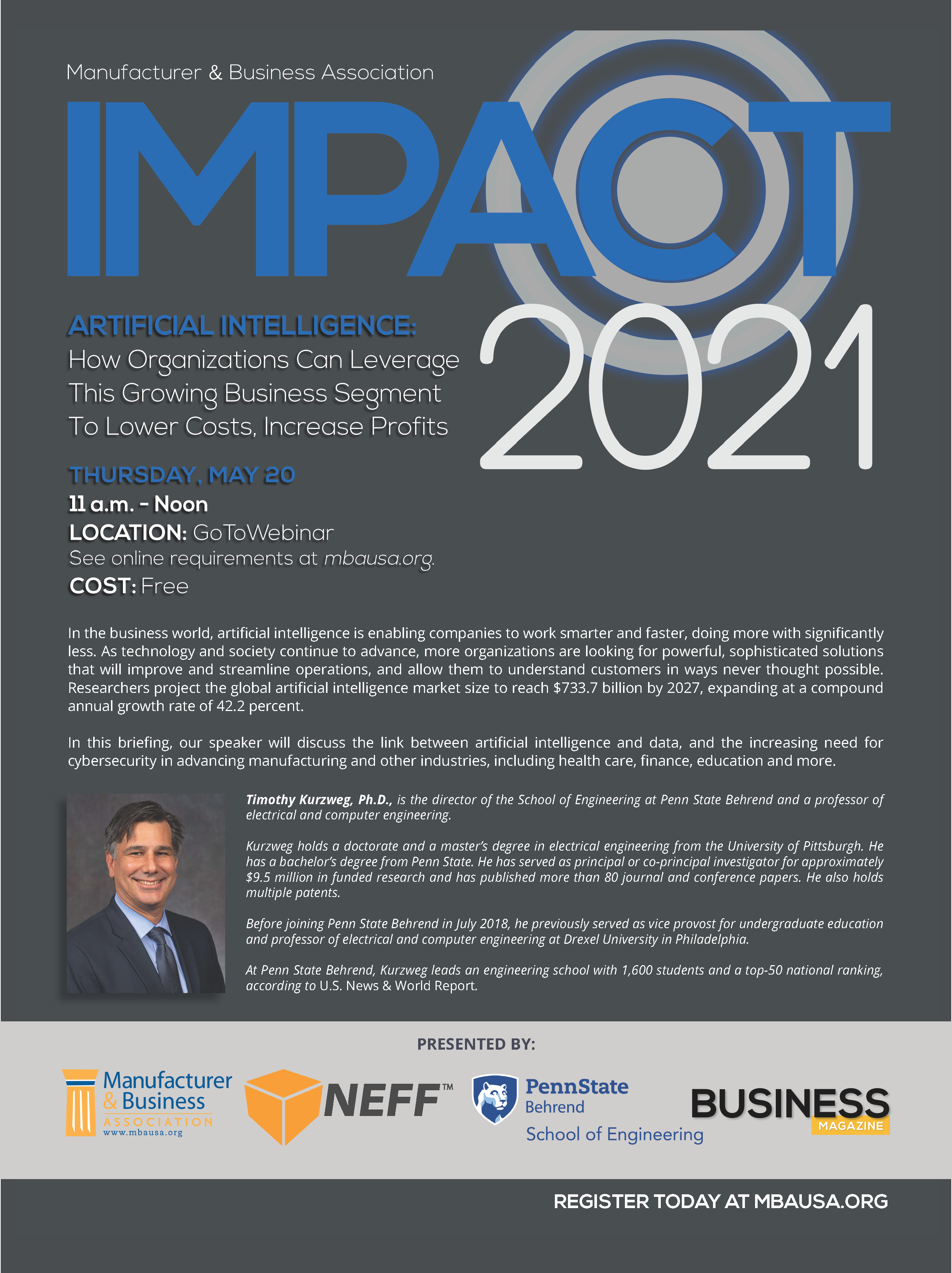 Join us on September 14 as we hear from a local difference maker and Fortune 500 company representative on the importance of fostering motivation, team building and talent within your organization that can have a powerful impact on your business and community as a whole.  Click here to register now! 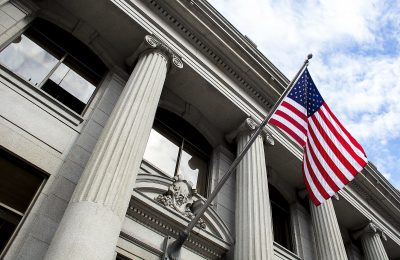 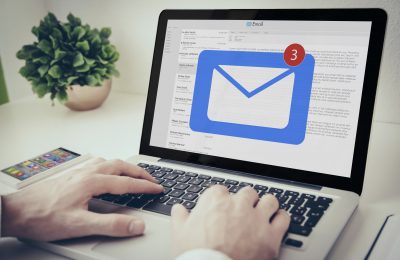 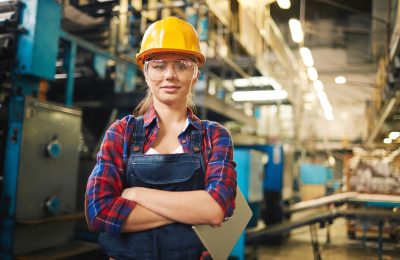 Manufacturing, Other Industries Should Consider Additive Value of Women Leaders to Aid Recovery